Last March I was part of a team serving in Kandiaro and treating those women who can’t afford health care. We had worked with discarded catgut sutures and no diathermy. I had promised shershah that I will return and be part of the team again.

Therefore, I undertook the trip with Emirates Airlines, which is most convenient for me as it flies from Birmingham and is usually punctual. Travelling by plane has its advantages. One of them is tranquil time in the lounge and on the plane, especially if one uses ear plugs and is fortunate enough to be sitting next to an individual who does not indulge in too many tipples and keeps the oration to a minimum. It is one of those times when I have time to put pen to paper to reflect on my last six days of travelling.

I travelled on the 10th March 2010 from Birmingham airport. Unfortunately the start was inauspicious as the flight was delayed by 2 hours. Therefore, not surprisingly I missed the connecting flight from Dubai to Karachi. I eventually arrived at Karachi at 10 pm on 11th of March. I was advised by Syed Irfan (the Chief Executive of Kohi Got Hospital) to travel straight to Kandiaro. However, common sense prevailed and I slept for a few hours to commence the onward journey at 5 am in Shershah’s banger, driven by his driver Hasan. Shershah had already travelled at day time. We travelled on to Jacobabad and then 20 kilometres further into Baluchistan where work has already gone on in the Rural Health Centre at Dera Allah Yar.

I announced my arrival at Dera Allah Yar by taking a pic. 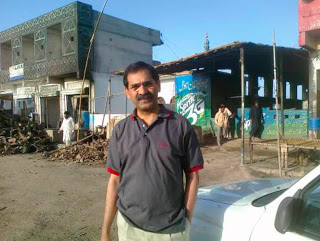 Break for a cuppa on the way. 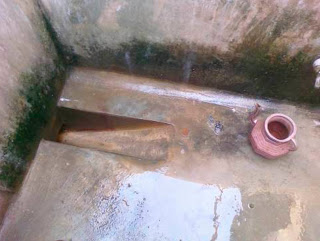 Motorway services are the most effective tools to reduce detruser contractions.

Jacobabad is well known for being the hottest place on earth and is named after Charles Jacob, the Brigadier General in charge of that area in the 19th century. He and his horse are buried in the Christian cemetery in town centre. In his day, people use to travel safely at night and they did that to avoid intense heat at day time. However now, travelling even at day time is fraught with danger as kidnappers and bandits are rife in the area. 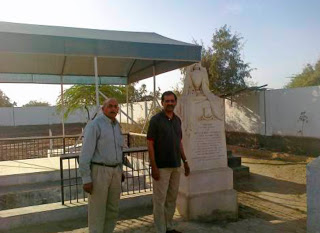 In front of Charles Jacobs grave.

I was pleasantly surprised to hear that Jacobabad is the only city in Pakistan with a HINDU majority. It boosts 135 local doctors with 100 of them belonging to the ethnic minority. It was heartening to observe this as conditions for ethnic groups in Pakistan are not conducive for healthy tension free life with progression as normal.

Bottom of the pile is the Rural Health Centre, then the Basic Health Unit, thereafter, Talluka Health Unit, District Hospital and then Tertiary Referral Hospitals. The problem is that 90% of the health care budget is given to Tertiary Hospitals like Civil Hospital and only 10% goes to the rest of the health units. Those of you who have worked in Civil Hospital will appreciate the paucity of resource in RHC. The troublesome finding, was the absence of doctors from these Rural Health Centres. There are a large number of doctors employed by the Government to serve in these facilities but no one turns up as they work in the urban area. They pay a portion of their salary to maintain the status quo. 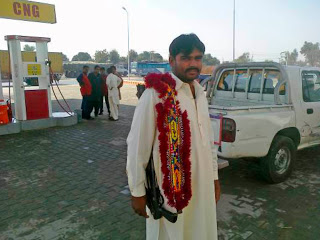 Shershah’s mission is to train hundreds of midwives and tutors. So that they can take over the Doctor’s place. Really, doctors are not needed to deliver routine obstetrics service. Moreover, he is pursuing training of rural doctors to be able to perform emergency Caesarean sections so that maternal mortality, pre natal deaths and occurrence of Vesico-Vaginal or Recto Vaginal fistulas are reduced. Furthermore, such patients who can’t afford to pay a bus fare, let alone pay for health care in Urban Hospital will receive a reasonable
standard care at home. 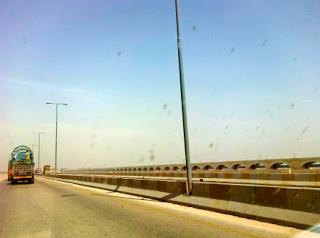 Sukkhar Guddu Barage still remains the most impressive structure although built during the British Raj.

We travelled on the 12th March in the evening to Thari Mirwa from Jacobabad via Sukkhar. It was a 4 hour trip and we arrived at night to be greeted by Dr Qurban Setho who is a local GP and MS of Thari Mirwa Rural Health Centre. We were served a very delicious meal and accommodation. We slept 7 to a floor and were tired enough to have uninterrupted sleep despite the ferocious attack by mosquitoes on Shershah’s army. We were grateful for the attached bathroom. It reminded me of the good training we had when one travelled for flood relief and drug campaigns. Qurban Setho has the distinction of performing the first caesarean section in Thari Mirwa. He has had training given by his mentor Shershah.

We had two anaesthetists, two scrub nurses, four junior doctors, two tables and four full instrument trays with sterilised gowns and towels with anaesthetic drugs and about 8 kilograms of sutures and good quality surgical gloves which I had taken with me from UK. 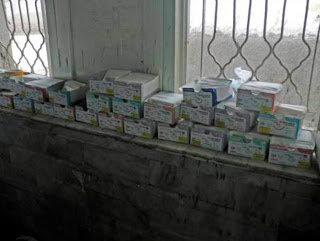 We were ready at 7 am but work did not start till 9 am because of difficulty in getting a theatre running which normally remains dormant. Once we got going, the progress remained steady and by 7.30 in the evening Shershah and I had done 23 hysterectomies. The light kept on failing and even the generator failed to work at times. Therefore, a number of times a procedure had to be completed in torch light or mobile phone illumination. Completion of the day indeed was not a mean feat for a professor of Psychiatry and a GI surgeon. 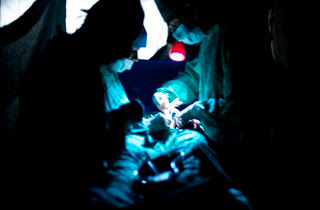 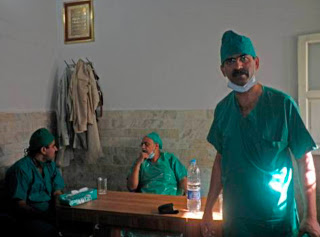 Those of you who are not aware I must put the record straight. When Shershah left  Nawabshah Medical College, he was offered a job at the Qatar Hospital Orangi where the only vacant post was that of a Psychiatrist. He was offered the post which he duly filled and went on to become the president of The Society of Gynae and Obs, Pakistan. You must have thought that you had heard and seen everything, but this one will take some beating… The down side is that Qatar Hospital cannot have a psychiatrist till Professor Sahib vacates the post. I have Shershah’s permission to divulge with this information.

The evening culminated with an open ceremony with honourable citizens attending a gathering where every citizen of Thari Mirwa gave a speech and the entertainment was snake dancing, fortunately performed by snakes themselves. Important feature of the speeches were the immense reverence of Shershah. One day he will be called a saint or a Sufi. I bet they would love to have his grave in Thari Mirwa or Kandiaro.

We travelled to Kandiaro and met up with the team lead by Shaheen (Shershah’s sister). They had arrived that evening to operate next day. We, therefore, travelled back the same night to Karachi and arrived at 5 am on the 14th March. While Shershah went to start the Annual Marathon race starting at PMA Karchi I headed home for a kip. He could do that as he had slept throughout the journey, while I had the task to keep the driver amused and awake. I took a day out to meet my relatives and travelled to Muzzafarabad at 7am on the 15th.

The time was spent seeing a couple of gastric cancer patients and visiting the construction
site. Following the recent heavy rains work has started again. I returned at 2 am on the 16th March and worked with Shershah at Qatar Hospital on the 16th. An interactive meeting with surgeons was very productive. We all learnt a lot and were better for it.

Shahida Memon hosted lunch at the Chinese restaurant “Dynasty” at the Avary Towers. Before you guys start thinking of me as lucky and get envious, the dampener is that Qazi Wasiq and Shershah were the two other guests. It was lovely to remise. I met Najam at PMA house. He has remained the principle organiser of the PMA Annual Marathon and is keenly involved with Journal of Pakistan Medical Association who are celebrating their 60th birthday. 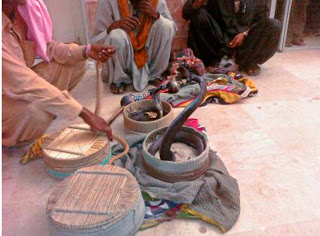 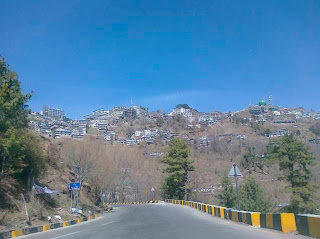 One was supposed to meet Idrees at dinner but his cousin’s cardiac event kept him busy at the NICVD. We wish him well.

I met up with an old friend Mabel in the evening and then had dinner with Shabbir and Shershah. In a nut shell, one had a fantastic time and a very fruitful one as well. I just wish that as torch light showed us the way during our operating at Thari Mirwa, someone could show such guiding light to the people at the helm of affairs in the Pakistan health care provision. It is good to contribute, but in a country which is a nuclear power and boasts an army of 600,000, complete absence of electricity in hospitals and total absence of basic health care is lamentable.

We all remember the conversation between Prime Minister Zulfiqar Bhutto and American Foreign secretary Henry Kissinger.

The situation in Pakistan is becoming worse by the day! Innocent people are losing their homes, their ... END_OF_DOCUMENT_TOKEN_TO_BE_REPLACED

We are so excited to present to you our annual report for the year 2020! Here you'll find a bunch of ... END_OF_DOCUMENT_TOKEN_TO_BE_REPLACED

Are you a UK taxpayer? Have you sent us an offline donation either through one of our events, appeals or ... END_OF_DOCUMENT_TOKEN_TO_BE_REPLACED

When COVID-19 struck the world, we had no idea how this would impact us as a charity. In March 2020, ... END_OF_DOCUMENT_TOKEN_TO_BE_REPLACED