Dr Iftikhar visited Muzaffarabad again this week. It was only three weeks ago that the chairman of the charity, Dr  Iftikhar visited Muzaffarabad to check on progress at the hospital site and to ensure that the project is on track. Dr Iftikhar arrived back to derby only last night after a hectic few days and his You can see below how the foundation for the hospital has taken shape  and the rapidity the with which the structure is beginning to taking place. Despite the cold weather, the workers are dedicated to continuing work through the harsh winter period. Fortunately weather has not hindered progress.

Dr Iftikhar was also invited on TV whilst arriving back in the south of the country to talk about what must be done to improve health-care
across pakistan. On behalf of MDAUK our thoughts are with the people of Haiti who are currently suffering from a natural disaster the likes of which hit  Pakistan and we understand to well the problems when you put pressure  on an infrastructure that is not ideal.

The Midland Doctors Association dedicated to providing a NHS level  facility in the South Asian region of Pakistan administered Kashmir.
With Kindest Regards 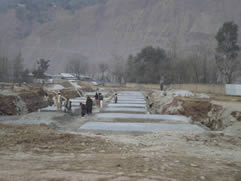 Despite the harsh winter conditions, the construction of the hospital continues.  I would like to thank everyone for their continuing support. I was handed an donation of £50 today from my Children’s Dependency Nurses who raised the money by not sending out Xmas cards this year- very kind indeed.  Dr Iftikhar also informs me that £500 was raised in a similar manner through the local donors.

Thank you again.
Below is a short email from the team on the ground with pictures attached of the work in progress. Kindest regards
Dr Asrar Rashid

Recent pictures from the ground are below. The water pipes are being laid so that water can be brought to the site for construction.

The New Year brings the continuing challenge of building a charity hospital in Muzaffarabad, in Pakistan administered Kashmir.
Once the necessary paperwork had been given due diligence by the Pakistani and Kashmiri authorities we have been carefully trying to select the right contractors for the important job of construction. However we soon realised that this would be too expensive.
Therefore in order to ensure that all funds are used on the hospital project and the fact that we are a 0% administration charity the pace of the project has been slower than we had ideally preferred.

Thankfully, you would have been receiving the regular emails from the MDAUK News desk to keep you updated with the project and you would have seen our progress.

I have made numerous visits to the facility and am due to go again very soon  as the project is at a critical and important stage. You will see from the pictures attached that the foundation stage is almost complete and soon the structure  will start to take shape. I personally negotiated a consignment of steel for the facility.

Now that the project has started to take on momentum, we need your help more than ever before.  We are focusing on constructing a part of the front of the facility so that at least some clinical work can begin.  Secondly I will be working in Pakistan undertaking charity surgical work aiming to impact women’s health in Pakistan,  an area which is rather neglected. Further, MDAUK team members are focusing on providing a clinic in Mirpur for the needy. Canadian doctors have taken on fundraising for the project for Feb 2010.

More than ever, and especially at this critical juncture, I must ask for your help in this project. Please support us as much as you can.  Please log onto to the website and register the emails addresses of friends so that  we can keep all past and future supporters of the project abreast with developments. The website will be undergoing important changes over the next few weeks as a means of communicating. As we are a 0% administration charity, we undertake all the admin, site visits and charity work in our own time and our own expenses and therefore we are dependant on your good will and generosity.

I must thank all our donors, supporters and workers without whom this all would not be possible. With kindest regards and best wishes for 2010.
At your service
Dr Iftikhar
Consultant Surgeon and Chairman
Midland Doctors Association UK

AIMING FOR THE SKY!

I, along with nine others, reached the summit of Mount Kilimanjaro in October 2008.  When the earthquake hit Northern Pakistan three years earlier, the images of devastation were very powerful and humbling. A couple of years on and I felt unsatisfied at my contribution through donating so I decided upon climbing Mount Kilimanjaro. The trip raised almost £7,500. The trek took six days and started off in dense jungle, moving through forest and heading above the cloud line. We trekked through moorland, traversing The Barranco Wall, culminating in the steep ascent up to the summit and finally completing our descent. I can say without exception it was the most difficult challenge I have set myself but worth every breathless step!

Each day would involve walking 6-7 hours, ascending on average 1000m with the exception of summit night. On this particular day/night, we walked some 7 hours during the day, slept from 7pm through to 11pm and commenced our summit night walk at midnight! We were encouraged to drink 3/4 litres of water per day and eat three hot meals per day. However, this was not always possible, particularly when we reached above 5000 metres. Altitude would cause a number of us to suffer with loss of appetite, headaches, and sickness. Our local guide set about setting a walking pace which we would adhere to throughout the trip. It was vital that we didn’t walk too fast, as the higher up we got, the more difficult conditions would become.

The group had bonded very well and there was plenty of fun and laughter along the way, but we had a blow early on. We lost one of the team due to sickness which surprised us all. For a short period of time we were quite emotional and saddened that we were one down after only two days but we motivated each other to reach the summit for our departed team member. The pace of walking was nice and steady and before we knew it, summit night was almost upon us.

This was the most difficult part of the challenge. It was eerily dark, cold and most significantly, there was less oxygen in the air, breathing was noticeably more difficult. The smallest task, such as kneeling over to shore up boot laces was taxing under such conditions.

There was a moment at the beginning of our midnight ascent where I did feel the beast that is Mount Kilimanjaro had beaten me. The terrain was incredibly steep, I was breathing incredibly hard and fast, the oxygen was not getting into my lungs fast enough, altitude was taking its toll and I started to have a panic attack! However, with some fast assistance from an exceptionally well versed porter, I was able to regulate my breathing and make some speedy dua’s. Not long after this temporary panic attack and (mentally) almost giving up (!) I was back in determined mode.

There were times as I looked up into the darkness, all I could see was a trail of head torch lights, at one point I could no longer distinguish between the torch lights and the stunning stars! As the night progressed and the higher we got, the more difficult breathing became. There were a number of times when we all felt very jaded.

However, with the sun beginning to rise, there was a sense relief that we were no longer in darkness and closing in on achieving our goal. As the sun rose, we knew we were not far, with this renewed hope, momentum and a steely determination we reached the summit at approx 8:15am, I dropped to my knees and gave thanks to the Almighty! We were all shattered, there were plenty of tears and when the tears passed, jubilation followed.

It seemed to donors that the MDAUK charity hospital project in Tandiali (Muzaffarabad) had stalled. However, the delay has been due to stringent and a very proper planning process.  The structural, mechanical, public health and HVAC drawings have been vetted several times by NESPAK to ensure that the hospital building would be able to sustain a future earthquake up to Richter scale 9.  Furthermore, during the last twelve months tender was sought and several meetings were held between MDAUK executive members and construction companies.

The quotations from companies ranged from 1.8 million pounds to 4.3 million pounds. After proper consideration it was felt that even the lowest bid was unreasonable. Therefore, we have had to select team members consisting of a project director, engineer, supervisor, accounts manager, driver, cook and a labour manager to construct the hospital ourselves.  The initial layout has been minimal and recoupable.

Furthermore, an on-site office has been established with a wireless telephone facility. Four guards have been recruited with the help of Mr Javed Iqbal (IG police Muzaffarabad) to protect the site which has been completely walled off as well.

Surveyors undertook the initial preparatory work between 06/07/09 till 10/07/09. Marking of the site was completed during that week and the work of digging was commenced on the 14th of July in my presence with the construction of an on-site water storage facility. Digging for the foundation has also commenced.

Following structural excavation anti-termite treatment will be put in place thereafter concreting will begin. With the grace of Allah we managed to reach this far and Insha’Allah the project will come to fruition within next two years.

A First In Pakistan

The Midland Doctors Medical Institute is proud to announce that we have Radiology online, ... END_OF_DOCUMENT_TOKEN_TO_BE_REPLACED

Midland Doctors will be holding its annual Nottingham Charity Event on Saturday 21st April 2018 to ... END_OF_DOCUMENT_TOKEN_TO_BE_REPLACED